The first dimension of the change: change the organisational structure 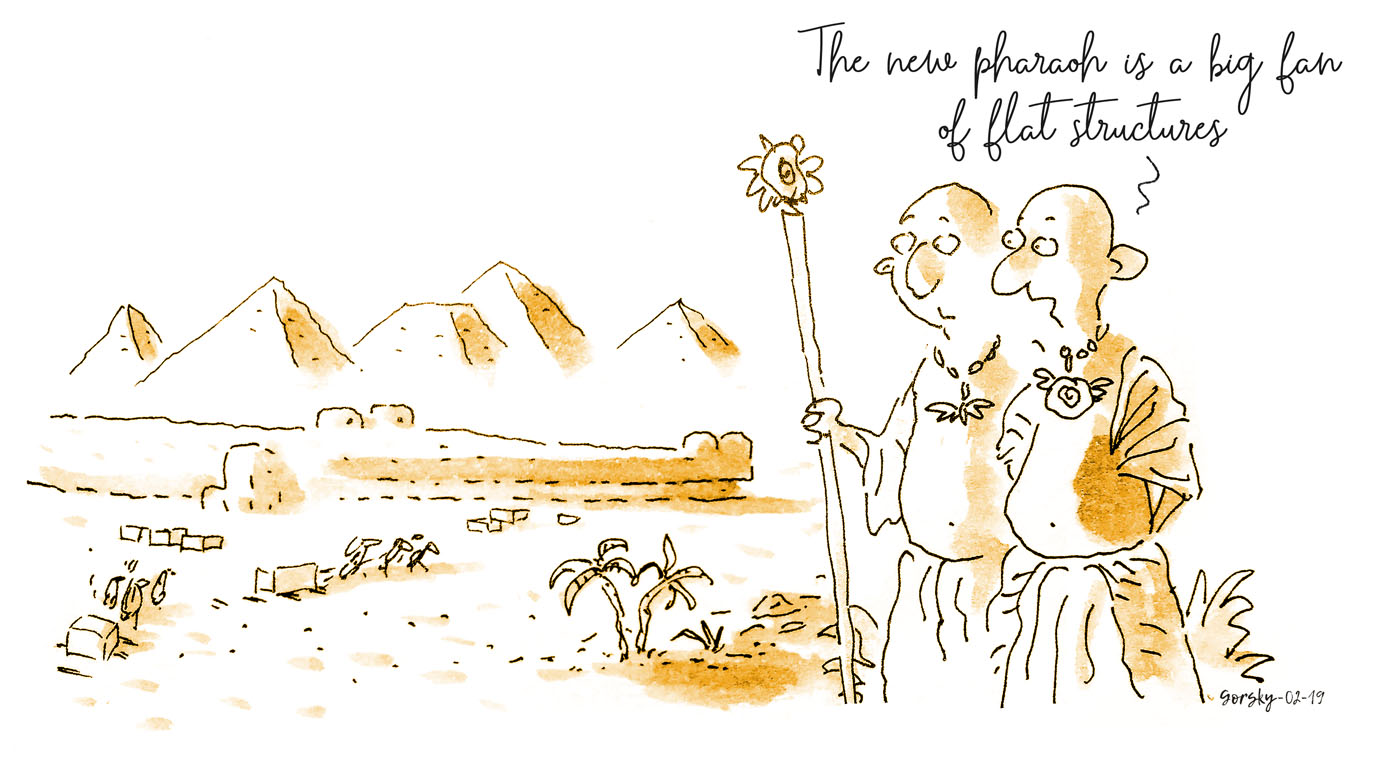 One of the first steps to develop organisations with shared and participatory management is the redesign of the company’s organisational structure in order to create “short and flat” organisations. To remain competitive in the markets characterized by high uncertainty and rapidity in changes the organizations must be flexible and therefore they have the following features:

Have few hierarchical positions: In the traditional companies the hierarchical structure follows the scheme of a pyramid, typical for example of organizations as the army. On the contrary, flat companies have few hierarchical levels; promote the involvement of the employees in the decision processes. Increase the rapidity of communication between colleagues and have a greater facility to make decisions.

In many companies the simplification of the organizational structures matches with the simplification of procedures, norms and rules. There is often a significant reduction of the companies’ fixed costs: the pyramid structure absorbs a significant number of qualified resources taking them away from the working tasks. The new structure reduces the distance from the executives to the people that know better the business processes and customers’ needs.

Have a process approach: it means to have the awareness that, even if organised “by functions”, in reality the companies carry out their activities going through a plurality of different and linked organisational units.

Are part of network that overcome the territorial boundaries to expand at international level.

For example, a lot of European companies in the automotive sector, have focused the activities on highest added value (core) processes. The not core activities have been outsourced to other companies, while they receive components from Asian suppliers; open new factories in East-Europe; and sign partnership agreements not only with local companies and research centres, but also with international partners.

Use new information technologies both in the business administration and in the factories: computers, softwares, tablets and nowadays robots and artificial intelligence.

To adapt to the new business environment, the companies that have been successfully to overcame the crisis have evolved from “medieval castle organization”, completely closed in itself, to “network organization”, open to many partners and players (companies, suppliers, etc.…).

An example of the success of this change is Dallara, an Italian automotive company. In few years Dallara have focused on the prototyping and the design of high-end competition cars, while the productive processes have been outsourced to a plurality of partners and suppliers mainly located in the Italian Motor Valley, the Emilia-Romagna automotive cluster. In 2012, Dallara opened an engineering centre specialized in IndyCars in Indianapolis. Nowadays Dallara sells its design services which use sophisticated simulation mathematical models to Pirelli, Ferrari, Ducati, Maserati, Lamborghini and Bugatti. In the last ten years, Dallara group moved from 100 to 600 employees: 90% are new graduates. The average age in the company is 34 years old. In 2005 race cars were worth the 95% of the turnover, today they decreased below the 50%. The majority of the turnover comes from the innovative services using the new information technologies.

Competitive companies have left the organisation model based on the principle of Taylorism: high fragmentation and division of the tasks, high repetitiveness of the movements – many will have seen the film “Modern Times” by Charlie Chaplin – and above all the strict division between who thinks (management and technicians) and who works (workers and office staff): the former have to make decisions and control the strict implementation of the orders and the latter have to implement the decisions without any form of participation.